I’m on a roll with meeting cool people in the political arena! Meet Red, Bright and True – a blogger from the East Coast who I’ve established a relationship with thanks to the “Amazing America with Sarah Palin” TV show on Sportsman Channel. (Note the season finale of AA is TONIGHT, May 29 at 8 p.m. ET) I’ve actually met her and her husband and they are such down-to-earth folks, which I think you’ll see in her responses back to me.

ME:  We’ll start with the obvious questions first as much of my audience my not know/recognize you. Why did you start Red, Bright and True?

RBT: I started my Twitter account (@redbrightandtru) and blog in December of 2010–right after the Tea Party mid-term victories. I just wanted a space where I could speak my mind and help show support for Governor Palin.

ME: How did you come up with the name?

RBT: My dad actually came up with the name for my blog. I told him the gist of what I wanted and in an afternoon’s time of texting back & forth he came up with the name ‘Red, Bright, and True.’ I loved the name right away because it captured exactly what I wanted. Red is my favorite color, bright was for being an encouragement to others, and true for talking about what’s real and factual. I though the wordplay on red, white, & blue was cool, too.

ME: Have you always been a Palin follower from the start? Or was it something that you grew passionate about?

RBT: Before August 29th, 2008, the day Sarah Palin’s VP candidacy was announced, I only kept up with politics on a shallow, current events kind of level. I was shocked at the response of Democrats and liberals toward Governor Palin during the 2008 election. I found the attacks on her, taken to an almost national pastime level, to be disgusting and a bit confusing. Feminists have been saying for years that we as women can have it all – marriage, kids, career, beauty, etc… Here was a woman who embodied exactly what feminists have been preaching for years and their response? Tear her down, humiliate her, mock her, lie about her. It was insane. I suppose this exposes how naïve I was at the time, but I was also confused as to why more Republicans weren’t speaking up to defend her. Knowing what I know now, like how she fought against corrupt Republicans in her own state of Alaska, explains the lack of support from some.

RBT: I’m currently looking for part-time work but my day job right now is being a mom to my kids. I’m also pursuing a master’s degree in public policy.

ME: Have you met Governor Palin? If so, tell us about it.

RBT: I’ve had the privilege of meeting Governor Palin twice. I saw her at two separate stops on her book tour this past December. One rumor that makes the rounds every now and then is that Governor Palin is a diva. That is absolutely laughable. She was incredibly down to earth and personable. After one of the book signings, she must have taken at least 10 minutes to talk with my family and me. As the conversation was winding down, I must have turned to gather my things. When I turned back around, she was bending down to hug each of my kids. That sweet gesture really impressed my husband & me. Both kids often talk about ‘the day we met Sarah Palin’ and our family picture with her is something we all treasure. 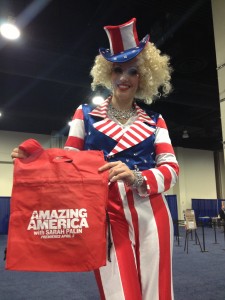 ME: I just met you (face-to-face) at CPAC, tell me about why you attend and what about it energizes you.

RBT: CPAC is so much fun! I really like meeting like-minded people and the speeches by Governor Palin the past three years have been real barnburners. One thing I really respect about Sarah is that she’s actually done the things she talks about. She’s not just about rhetoric–she’s got a real record of reform.

ME: Also at CPAC, we discussed getting you outdoors learning to shoot a gun or a bow – are you still game for that?

RBT: I am totally still game for learning to shoot a gun or a bow!

ME: If you could change just one thing politically in the world right now, what would it be? (and putting Palin in for president is off the table as that’s too easy!)

RBT: If I could change anything politically in the world, I’d change the electorate’s level of interest in politics and attention span. Talking to my pre-2008 self here, too. It’s frustrating to me that people put more time into watching television, something with little to no benefit, than they do into researching and understanding issues that will impact them; oftentimes these days, negatively. The Pericles quote comes to mind: “Just because you do not take an interest in politics doesn’t mean politics won’t take an interest in you.”

Conservatives and Republicans are often just as easily swayed by pretty words as the ‘low-info’ voters on the Democrat side that they often like to malign. We are still way too often electing politicians who say one thing and do another. Take Sen. Marco Rubio for example. He helped write and promote the Gang of 8 immigration bill last summer. When there was outrage from Tea Party groups and conservatives, he himself denounced the bill and tried to escape from the group. Plenty of people stayed mad at him for his flip-flopping but I saw so many on twitter seem to fall back in love with him the next time he gave a pretty speech. This short term memory  (from many who should know better) is part of the problem.

Thank you Red, Bright and True, for taking the time to answer my questions and good luck on your Master’s Degree!