Part of my job that I really get a kick out of is getting to meet really cool people across all platforms and industries. With my work on the new Sportsman Channel series “Amazing America with Sarah Palin” I’ve been able to connect with fun, down-to-earth bloggers, writers and media in the political arena that I probably wouldn’t have come across before.

Kevin Scholla is the host and creator of The Palin Update on Mama Grizzly Radio. The show features top guests as well as the latest news on Governor Sarah Palin. Kevin is a professional news/sports anchor. He also announces for several pro and college teams. Kevin has served as a press secretary and committeeman. Follow Kevin on twitter@kevinscholla and @MamaGrizzRadio

Below is a little Q&A Kevin was kind enough to provide for me. Enjoy!

ME: Ok, we need to introduce you to my readers (all three of them), so tell me how you became to write about Sarah Palin and then created Mama Grizzly Radio (formally titled SarahNET Radio)?

KEVIN: I’ve been a Sarah Palin supporter for years. I actually suggested her as a vice presidential candidate before John McCain chose her. I exchanged some emails with the Governor and her staff before she became a national figure. Funny enough, when that whole weird witch hunt over Palin’s emails went down, my correspondence with her was among the thousands of emails released. These wackos were looking for scandal and all they got were two people talking about family! My daughter Blair Lovie and Palin’s son Trig were born a month a part and I was congratulating her.

In 2011 I launched The Palin Update with Kevin Scholla. I wanted people to have a fair and factual place to go to follow Governor Palin if she decided to run for president in 2012. When she announced that she wouldn’t be running we were already several episodes in to the project. So, we had a decision to make. Stop the show or keep going? I think the decision was an easy one. Just because she wasn’t running for the White House didn’t matter. She wasn’t going anywhere. Her values and her influence were stronger than ever. We’ve had a new show each week ever since with top guests and commentary. It’s really been a great run and a tremendous outlet to showcase Palin and what she stands for.
ME: Have you had a chance to interview Sarah either for your online blog at Breitbart News or for your radio show? 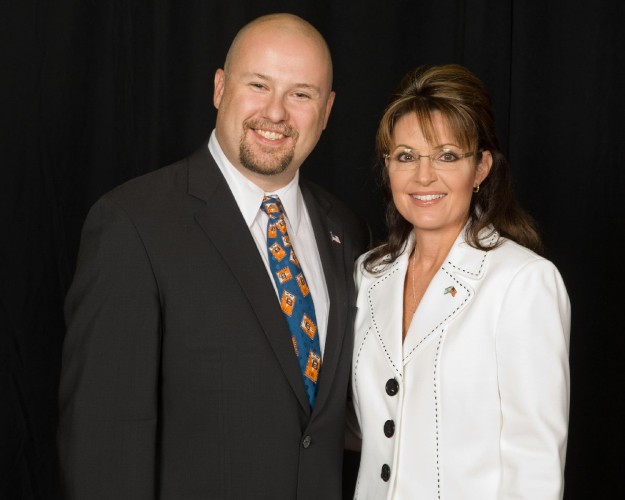 KEVIN: I think that’s the big crescendo everyone is anticipating. We have had Todd Palin on multiple times. Bristol has been on “The Palin Update” plus I hosted “Breaking It Down With Bristol,” a weekly interview show with her during her second stint on Dancing With The Stars. Palin’s brother, father, and cousin have also been guests on “The Palin Update.” I also had the honor to interview Palin’s lovely mom, Sally Heath for a Breitbart News Mother’s Day piece. They are really a wonderful family in every way. When the time is right we will have the Mama Grizzly herself on the show.
ME: I think I’ve seen photos of you and Sarah at events too – how many times have you met her?
KEVIN: I’ve had the honor of meeting the Governor several times. I want to say about 7-8 times. She is so engaging and genuine in person just as she comes across on TV or in public settings. She is an ordinary person who is extraordinary. Every time I’ve met Sarah Palin she always asks about me and my family. She wants to know about the person she is talking to, instead of focusing on herself. I really admire how she continues to keep a big smile on her face even after all the horrible attacks she has endured over the years from media, politicians, and other misguided people.
ME: You have “Batman” listed on your Twitter bio – is this a side job?
KEVIN: Batman is the best. No super powers. He does it all with smarts and physical training. I certainly keep Batman hours nowadays. I watch my two children daily and work multiple jobs, so sleep is not really on the schedule. I appreciate the schedule the Caped Crusader keeps because I share it when I’m in Gotham or anywhere else.
ME: In your downtime, we’ll find you…..
KEVIN: I don’t have downtime but when I’m not “working” I am coaching my daughter’s tee ball and basketball teams, playing with my son, watching my Bears, Bulls, White Sox, Mets, Blackhawks, Blue Demons, and Gators, eating like a razorback at Chick-fil-A, fishing, target shooting, volunteering at my church, and just taking part in general rabblerousing.
ME: If you could change one thing in the world, what would that be? (And saying Palin for president is off the books b/c that’s too easy)
KEVIN: Wow. That’s a tough one. Just one, huh? I think I’d like our service members to be appreciated more. Our veterans and our active military give us so much. Yet, some people still can’t stand for two minutes and show their respect during our national anthem. That really makes me sick. Our true heroes deserve our gratitude around the clock. I also wish we didn’t have to worry so much about our children. It’d be nice to live in a world in which we didn’t have to monitor every move everyone makes. A place where our kids would be safe and not in harm’s way. Since that’s not the case though I am proud to say I watch mine like a hawk…or a Papa Grizzly if you will.
ME: Why do you follow Sarah? What is it about her, or her politics, that you gravitate towards?
KEVIN: I agree with Palin on virtually everything politically…so that’s a big part of it. But, it’s much more than that. She is the real deal. I trust her all the way. She isn’t afraid to call out those who harm our country or ignore our Constitution. She goes after the crooks and liars in both parties…and she does it in plain English. One of the main reasons McCain and Mitt Romney lost is because they treated Obama with kid gloves. They avoided Ayres, Rev. Wright, and the countless questionable decisions by a community organizer with zero experience. Imagine Palin debating Obama or Hillary? She’d say ‘please look in the camera and tell the American people what happened in Benghazi’. Then we’d hear Ralph Kramden-esque stuttering and stammering from the other side. Palin keeps it real. I also support her because of my daughter and son. I want them to have leaders like Sarah Palin to look up to; real patriotic, American role models.
ME: Some of the things Sarah stands for are 2nd Amendment rights and obviously the right to hunt and fish – are you a hunter/angler? If not, would you be willing to try it? 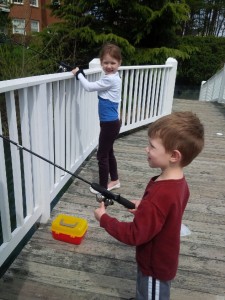 KEVIN: I enjoy fishing and shooting. I especially like getting my kids involved. They both have already been fishing several times. We went to a gun show recently and my daughter really liked the pink one-shot rifles. I would trust her with a firearm now, honestly. She just turned six. My son? Maybe when he’s 15! He’s a three-year-old wild man and acts like Johnny Knoxville.

ME: I know you’ve been watching all of the episodes of “Amazing America with Sarah Palin” on Sportsman Channel and your reviews are awesome – if you were the director/producer – who do you think should have been on the show with Sarah?
KEVIN: One of my 600 jobs is announcer for the Trenton Thunder, the AA affiliate of the New York Yankees. We have dogs for bat boys! They pick up the bats with their mouths. I think that’d be a fun feature. I also think it would be cool to showcase the American Heritage Girls. They are an alternative to Girl Scouts. AHG is Christ centered and does a lot for our military 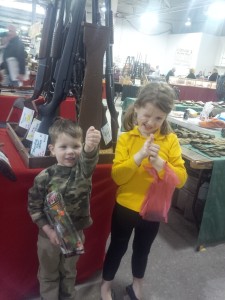 ME: What does “Amazing America” mean to you?
KEVIN: This country is exceptional. We have so many different people from different families and backgrounds living all together thanks to our freedom and liberty from God. Each state and town is unique and stands alone, yet we are all together and united at the same time. From cities to farms to beaches, we have it all. Everyday I am thankful to be an American. I love this country with all my heart. “Amazing America” shows us that we are the best, hardworking, patriotic, and fun-loving people in the world. Sarah Palin is the perfect example of this.
Posted in Question & Answer